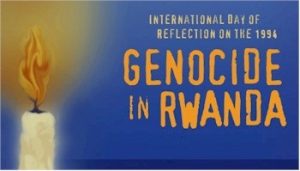 International Day of Reflection on the 1994 Genocide against the Tutsi in Rwanda is on Thursday, April 7, 2022

The UN Adopts the Resolution

The UNGA meeting held on 23 December 2003 discussed the miseries of the Tutsi community of Rwanda in 1994 and adopted a resolution to observe an international day of reflection on the Hutu-led extremist government’s atrocities. According to the UN Resolution A/RES/58/234 that was adopted on 23 December 2003 by the UN General Assembly, 7 April will be celebrated as International Day of Reflection on the Genocide in Rwanda every year.
Further, the resolution was revised by the UN General Assembly on 12 December 2017 to specify the day as a reflection on the genocide experienced by the Tutsi minority of Rwanda at the hands of the Hutu majority who were in government in 1994. The UNGA adopted a draft resolution A/72/L.31 that renames the day as International Day of Reflection on the 1994 Genocide against the Tutsi in Rwanda.

In 1994, more than 800,000 people of the Tutsi minority were slaughtered in just over 100 days by the Hutu-led majority government in the Republic of Rwanda. Tutsi are the second largest community of Rwanda and they are 14% of the total population whereas Hutus are 85%. Both communities are Black Africans, but they have ethnic differences.
Despite having a small share in the Rwanda population, the Tutsi community ruled the country for a long time under the kingdom model until 1959 when Hutu revolutionists overthrew the monarchy and pushed thousands of Tutsi to neighboring countries of Rwanda including Tanzania, Uganda, and the Democratic Republic of Congo. Eventually, a Tutsi-led rebel group the Rwandan Patriotic Front (RPF) formed and waged a war on Hutus in 1990. The war continued for three years and ended in 1993 after a peace deal between the two communities. Absolute peace remained a dream even after the peace-deal and a new tragedy happened in April 1994. Then-President Juvenal Habyarimana died in a plane crash along with the President of Burundi on 6 April. Since both the officials were Hutu, the MRND led-government accused RPF of shooting down the plane and started a well-organized crusade against Tutsis. All the ruling institutions worked in an integrated way to carry out the genocide. Militias and armed forces were killing Tutsis whereas the media was promoting anti-Tutsi sentiments and propagating the genocide. Radio Télévision Libre des Mille Collines (RTLM) was at the forefront of running the propaganda campaign. Tutsis were being slaughtered by their countrymen in houses, streets, and wherever they were seen. Neither Hutu husbands spared their wives nor Christian clergy stayed behind in killing Tutsis. Although armies of the USA, Belgium, France, and the UNO were present in the country, Tutsis had no place to hide in their homeland. By the 100th day, approximately 800,000 Tutsis had kicked the bucket. Around 2,000,000 Hutus (including armed forces and the civilians) participated in a bloody campaign against groaning Tutsis. Not only Tutsis, but moderate Hutus were also being slaughtered. A famous drama film Hotel Rwanda (2004) portrays the depression between Tutsis and the moderate Hutus. The genocide ignited many new conflicts in Rwanda and its neighboring countries; the conflicts continued till 2003 and claimed the lives of around 5,000,000 people in the region. The global leadership took an action to normalize the situation in 2002 and established the International Criminal Court that also could do nothing to punish the responsible ones; justice delayed justice denied.

Purpose of the Day

The International Day of Reflection on the 1994 Genocide against the Tutsi in Rwanda is designated to remember the atrocities of Rwanda in 1994 and express the civilized world’s disgust for such incidents. Ethnic differences should never be taken too seriously that they make us violent against others. The day highlights the consequences of thinking on ethnic grounds while dealing with others. Ethnic differences should be taken as a beautiful diversity of humankind or otherwise, they would make us brutal wild carnivores. The fire of ethnic conflicts spread beyond the place of its ignition like the 1994 genocide led to the emergence of bloody civil war in DR Congo. Last year on 9 April 2019, the UNESCO Director-General Audrey Azoulay spoke to a public ceremony and said: “the genocide against the Tutsi cannot be of concern for Rwanda alone. Genocide involves all of humanity and that is why the transmission of its history is a collective responsibility”. The statement suggests that global leadership observes this day to create a global narrative against such atrocities in the world.

The day is observed globally although it is a public holiday nowhere other than Rwanda. Public ceremonies are held in Educational institutions and by NGOs where speakers recollect memories of the genocide and argue on the collective miseries such incidents bring. Scholars write about the purpose of International Day of Reflection on the 1994 Genocide against the Tutsi in Rwanda whereas reflection debates are held on TV. Social Media also plays its role on the day by promoting relevant hashtag trends and sharing content relevant to the day.