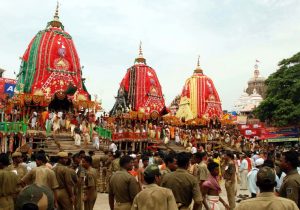 Lord Jagannath Rath Yatra set to be celebrated in India on Monday, 12 July 2021. It is one of the most famous celebrations of India when millions of devotees gather at the Jagannath Temple in Puri to pay homage to Lord Jagannath and participate in the yatra processions. Images (statues) of three Hindu deities including Lord Jagannath, Lord Balabhadra, and Lord Subhadra are taken out of the temple to meet their devotees. The festival is arranged at Puri in Odisha and the legend behind the arrangement is that Lord Jagannath visits Gundicha Temple because it is his birthplace. It is also believed that he visits Mausi Maa Temple, which is situated near Saradha Bali, Puri. People who visit this place are motivated by various such tales related to Lord Jagannath and his devotees. The Statue of Lord Jagannath presented in black hue because he represents the ancient common farmers of the land who appeared to be black as they were exposed to extreme heat in farms. The day is celebrated on the 2nd day in the bright fortnight of Aashaadha month; it is called Aashaadha Shukla Paksha Dwitiya.

Rath Yatra is a Sanskrit word that means the congregation around a chariot carrying a holy image however this word typically refers to the ceremony of Lord Jagannath Rath Yatra at Puri village. In Hindu mythology, Lord Jagannath is the deity who watches over the whole world.

Interested in the history of Jagannath Rath Yatra? Let’s have a brief overview of the historical background of this famous ceremony in India. Rath Yatra is an old religious practice in Hinduism (evolved form of ancient Vedic religions) that is thousands of years old religion. Originally, Rath Yatra is believed to be started around 5000 years ago in the city Jagannath Puri, Odisha, India. The celebration never stopped except during a short period when a few Muslim invaders invaded the temple. It is a unique temple where three deities’ images are installed and they are siblings. The practice was slowed down during the Muslim rulers’ reign and then it was enhanced by the Western lovers of Yatra. The Yatra received remarkable fame when a Sadhu Hanumandasji claimed to be the devotee of Lord Jagannath started Rath Yatra in Ahmedabad on the lines of Puri in 1878. Days passed and devotees of the Yatra kept increasing every year. Rath Yatra 2019 was attended by millions of people however this year would be remembered as an unfortunate year for the administration of Jagannath Temple because they would not be able to host such a large number of devotees.

Many legends are attributed to the celebration of Jagannath Rath Yatra. One famous legend reveals that Krishna and Balram were invited by their maternal Kansa to his palace and they were sent chariots to have a fast and luxurious journey. The purpose of the invitation was to get them and kill them. According to the legend, the day of Rath Yatra commemorates the departure of Krishna on the chariot.
Another legend suggested that Rath Yatra day commemorates the day when Krishna brought his sister Subhadra out of the palace to expose her to the beauty of the suburbs of Puri and let her experience the joyful ride of the chariot.
The widely known legend behind this procession is about the cremation of Krishna and the drowning of Balram. It is believed that when Balram found Krishna dead, he brought his brother’s corpse and jumped into an ocean due to the trauma he experienced after his brother’s death. The day when Krishna and Balram drowned into the ocean far from Puri, the king of Indradyumna was told in his dream that two holy bodies (of Krishna and Balram) would be exposed to the people of Puri and that it would be the responsibility of the king to build statues of those deities along with their sister’s statue. The king found his dream true when the mentioned bodies were found; therefore, he took the responsibility to build the statues. The day the bodies were found is celebrated as Rath Yatra day. 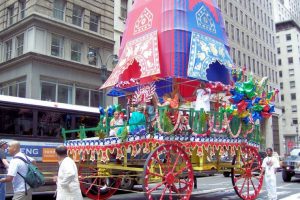 Rath Yatra 2021 would start at Gundicha Temple on Monday, 12 July 2021 and after the 5th day from Rath Yatra, the ritual of goddess Lakshmi called Hera Panchami would take place on Friday,16 July 2021. On the 9th day of Rath Yatra, the next would be Bahuda Yatra on Tuesday, 20 July 2021. Bahuda Yatra is a procession when the trinity of statues come back from Gundicha Temple to Srimandir. This homecoming ceremony is attended by lakhs of devotees whereas the statues are brought on chariots. Statues of all the deities would be ornamented with jewellery on Monday, 21 July 2021. This ritual is known as Suna Besha or Rajarajeshwara. The final installation of the statues to the Srimandir would take place on Friday, 23 July 2021. Thus, the statues of Lord Jagannath, Balabhadra, and Subhadra would be installed into the main temple for one more year to come. The chariots would be dismantled and the wood is kept to burn in the kitchen of the temple.

What would be the effect of the COVID-19 pandemic on Rath Yatra 2021?

COVID-19 pandemic has frozen the whole world and almost all of the countries are facing strict lockdown. In this situation, Social Distancing is a common demand by the policymakers of every country because it is the most valuable precaution against Corona Virus. It is also believed that the congregation at the Lord Jagannath Temple would be banned by the state authorities. The Times of India website reveals that the Puri Jagannath Temple administration is in trouble because they are unable to get permission by the government to welcome millions of devotees that they were expecting. Chariots that are pulled on the Yatra require at least 600 men to drive them because of their giant size. It is believed that they might get permission to have that ritual fulfilled after the state authorities are convinced that the temple administration has taken complete precautionary measures against the virus. You can expect that you would be part of the procession by watching the ceremony on television. It is better that you stay at home and watch the celebration on TV instead of going to the temple and expose yourself to the fatal disease.