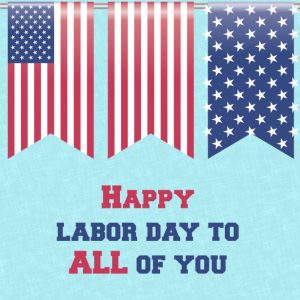 Labor Day in the USA is a public holiday celebrated on the first Monday in September, recognized as a federal holiday. It is also called Labor Day Weekend.

Labor Day is called the “unofficial end of summer” Because many fall activities, such as school and sports begin about this time. Sports like football, tennis, and athletics blossom at Labor Day weekend. In fashion, Labor Day is considered the last day to wear a white dress.
Families and friends enjoy a long weekend before the re-opening of schools. They go outside and enjoy beaches and barbecues over the Labor Day Weekend. People also enjoy numerous activities in cities like Labor Day Carnival in New York, fireworks, Labor Day Concert, 12-hour dance parties, happy hours in restaurants, and many other activities.

Labor Day has become an important weekend for discounts and allowances by many retailers in the United States, especially for Back to School sales. Some retailers claim it as the second-largest sale dates, after the Christmas season’s Black Friday.

Central Labor Union and the Knights of Labor, promoted Labor day by a parade in New York City In 1887,
According to one early history of Labor Day, a public parade of various labor organizations was held on September 5, 1882, under the auspices of the Central Labor Union(CLU) of New York.
An alternative thesis maintains that Peter J. McGuire, a vice president of the American Federation of Labor proposed the idea of Labor Day on May 8, 1882, According to McGuire the event should begin with a street parade followed by a picnic.
In 1887 Oregon was the first state in the United States to make Labor Day as an official holiday. Following the federal holiday in 1894, thirty U.S. states officially celebrated Labor Day.

Labor Day vs. May Day

The date of 1st May emerged in 1886 from the bloody Haymarket affair, later becoming known as International Workers’ Day. In 1889 an international federation of socialist groups and trade unions nominated May 1, as a day in commemoration of martyrs of the Hay Market Riot in Chicago. Till now, many Asian, European and other world countries celebrate Worker’s Day on 1st May.
In the USA, Conservative Democratic President Grover Cleveland provoked that labor holiday on May,1 would tend to rip the Haymarket Affair around the globe. He supported the September Labor Day holiday as a less incendiary alternative. The date of September was finally adopted as a United States federal holiday in 1894.