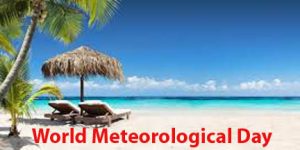 UN Resolution A/RES/531(VI) establishes a relationship between the United Nations Organization (UNO) with the World Meteorological Organization (WMO). The United Nations celebrates World Meteorological Day to commemorate the establishment of WMO. In fact, the day is designated to acknowledge the contributions that the World Meteorological Organization made to protect natural resources (water, air, and weather as a whole), and to provide food security, transport facilities, and water resources, especially to the underdeveloped areas of the world albeit it works in the developed countries as well. WMO has 193 member states/territories and it works in coordination with a network of the National Meteorological and Hydrological Services that is established in many countries of the world. This world day is solely related to environment and climate where it acknowledges the contributions of those who are working for the betterment and protection of the environment and insists upon the others to take measures to protect the global climate formed by Nature.

WMO Executive Council has recommended this theme for celebrations of World Meteorological Day 2022.

This year’s theme especially focuses on the importance of climate and weather. The global leadership has set up this theme to highlight that the world has indeed reached a critical point regarding water scarcity and climatic destruction. Water is one of the major issues that many segments of the world are facing including Africa and the Middle East. Some analysts believe that two nuclear-armed countries of South Asia named India and Pakistan might have a war on the issue of water in the near future. The other issue is Climate which has ruined the natural habitat of many countries like Australia, France, Germany, England, African countries, and Pakistan. South Asian island countries are about to go under the Indian Ocean in the near future. The youth of the world is active to force global leaders to take immediate measures to fight the curse of Global Warming and Climate Change. Greta Thunberg is one of the leading young activists who went every end to the fight against Climate Change. The theme is set to highlight the extreme these both issues have reached and to discuss the possible measures the contemporary world can take to address these issues.

While the theme for the previous year was “The Ocean, our climate and weather”.

The UN has designated World Meteorological Day as a public observance, but it does not oblige its members to declare a public holiday on 23 March. Therefore, it is not a public holiday but people do arrange public events to celebrate this day. These people include meteorology students, meteorological professionals, departments of meteorology in universities, and some governmental as well as non-governmental organizations. Weather, water, and climate are always hot-topics in the contemporary era, therefore, people who observe the World Meteorological Day highlight the extreme the anti-nature d’état has reached and proposed policies that can help us to protect Nature.
Apart from that, many countries ask TV channels to broadcast awareness programs and the writers to write research-based analyses about the state of climate affairs. They also issue post-stamps and arrange Tree-planting ceremonies in their governmental offices. March is a good month to plant a tree therefore they many organizations start tree-planting expeditions and encourage the masses to contribute to such activities. It is also observed that youth appears on the roads of many countries to press their ruling authorities to take immediate measures to stop carbon evacuation from industries that are damaging the ozone layer and causing Global Warming. Social Media activists promote the following trends to observe the day.